Summer in the Neighborhood

My small beach town along one of the many jigsaw edges of Puget Sound has a little under a mile of coast line, bordered on each end by Indian land.  The census tells me we have 721 people per each of our five square miles, which the net tells me is low density;  all I know is I have gotten used to the trees and the gravel road and the reported wildlife sightings of everything from the neighbor’s cat to a known regional cougar.  Deer cross my road to get to a small stream that runs through the overgrown brush between yards.  A great blue heron has kept his home in one of my cedar trees for at least five years that I’m aware of, and my property is regularly marked by owls, pileated woodpecker, hummingbirds and songbirds, and visiting osprey–though obviously not all at the same moment.

And it is not unusual to spot eagles, wheeling high above my property in some thermal, lazily scanning beyond the land trust land, out past the houses to the water.  A native American friend looked up off my deck one afternoon and said, “A blessing.”  When I asked him what he meant, he said, “Eagles are the messengers of God.  Whenever I see one, I figure it’s a blessing.”

I knew we had an eagles’ nest in the area but wasn’t sure where, until a storm took out the large, very old tree that held it.  The neighbors whose property it was on were heartbroken: this pair had been returning for several years, raising two chicks each season.

Late this past winter I saw adult birds slowly tracking the sky above my road–two, sometimes three at a time, and I allowed myself to hope they were scouting for new real estate.  In April two I noticed two eagles circling very near my house and I did spot a huge old nest, but it looked too thin to really be in current play–more likely it was the abandoned residence of an osprey that gets regularly run out of the area by this larger crew.

On a very windy spring day I was walking back home with my dog, and just above us at the top of our hill were two adult eagles, perfectly situated in the jet stream so that they were suspended by the air, one higher than the other, parallel and motionless, while down on our level the wind whipped through the trees.

But then no sightings for quite a while, and I heard nothing from the neighbors.  One day, though, coming up a wooded path that connects my road to the one that runs along the water, I found the body of a small sea duck, a bufflehead.  I looked up and around;  this is a fair bit away from the beach and under thick layers of very tall cedars and fir. The bufflehead didn’t fly up here to die–someone had dropped it.  A week or so later I found another similar casualty in the same area.

Around this same time someone asked me if eagles mate for life.  I wanted to ask if this person was kidding.  I had just recently gotten an e-mail from a man I dated nearly two years ago, who continued, every three or four months, to contact me with flirtatious text message.  Once back when we were actually involved he told me, with great sadness, of his struggle to get over a woman in his past, and to be fully present in his current life.  I was empathetic, until I asked him about it later and noted the description of the woman had changed.  I couldn’t help myself and I referenced her once more, some time after that, and sure enough, The One He Couldn’t Quite Let Go Of had a whole context new and different.  Now getting this e-mail, a more dedicated step than the texts, all I could figure was he must be dating someone who was scaring him, and so had moved me up the slot of the one-that-got-away. He has been thinking of me, he said.  He has realized how special our situation was.  Is he kidding?

The eagles will be a pair until for some reason they’re not.  I’m not sure they’re lesser creatures because of it.  I do know we just really love the stories we tell ourselves about wildlife purportedly demonstrating human ethics, almost as much as we love the ones about humans demonstrating genuinely ethical behavior.

In late June, I began hearing calls–I wasn’t sure if they were eagles or osprey, they didn’t sound quite right–maybe they were gulls?  That didn’t seem right either, but whatever they were, they were insistent and regular:  loud, short screams.  The next time I walked down the path I heard the calls and turned and looked up, just in time to see a huge bald eagle shooting out of the trees toward the water.  The evident peeping continued behind her, and I knew: this was Mom, on her way to get more food for the relentless, obnoxious nestlings.

I was still hearing the voices but not long after that they seemed to be in slightly different places in the local canopy.  They’d become branchers,  the ungainly adolescents of the avian world.  Even if they’re able to fly they don’t believe it, and often cry and cry for their parents through the whole ordeal of edging out the security of the nest.  A friend called around that time, bemoaning her youngest son who was a year out of high school but passively refusing to do much of anything with himself.  I tried to explain that he was just the human variant of a brancher.

By late July I began to see large, dark shapes tangling through the sky.  Not the confident wing strokes of our national symbol, these forms had a visible tension and imbalance; their landings were a mess.  I stood in the street one afternoon, watching them on a pretty good glide, when a car pulled up next to me and my neighbor called out, with all the pride of any parent, “Are you seeing the babies?  They started flying on the 15th!  We got them on video!” 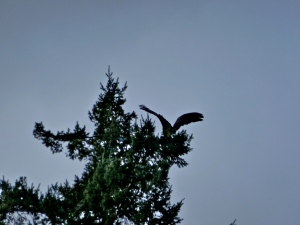 I did not respond to the ex’s email and at this writing I have heard nothing for some time.  My friend’s son just left for college, and he is complaining about his roommate, but we are hoping for the best.

My neighborhood has gone quiet.  The young birds seem to have headed off, with all the daring of sixteen year olds on their first road trip.  They’ll flap around the area sampling food and interfering with other eagle’s territories, ultimately arriving at the December/January confab along the Skagit River, where huge numbers of eagles congregate every year for the salmon runs.

The osprey, though, has returned to the thin nest across the road.  He calls out sharply through the late summer air, between shredding the fish he’s carried up there with him. 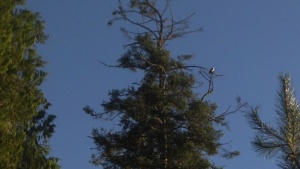 I live within a block of an eagle’s nest.

Blessings on us all.