I just returned from a conference in Chicago.  I was there four days, at a time of year when either region–the Pacific Northwest or the Midwest–is capable of slinging any kind of weather imaginable.  Not quite sure how to pack, I went dressed for the worst, with layered shirts and boots and jeans, and a full-length faux fur that belonged to my mother.

I grew up in Northern Indiana, so Chicago is almost like visiting home.  It was my city of reference, birthplace of my grandmother and father, and my memories of it are the imprints of the big city on a small kid:  the size of the buildings, the hulking shadow of the elevated train tracks, the diesel exhaust from the busses, yellow cabs shooting around like insects.  My childhood Chicago is all about the loop: restaurants with starched white tablecloths and heavy silverware, the old Abercrombie and Fitch with my dad when it was still an “elite outfitter of sporting and excursion goods,” and of course the fourth floor of Marshall Field’s building–toys–though standing in front of them, on a break from this conference, I suddenly remembered that the escalators Up were an attraction on their very own.  My adolescent and teenaged years in the city were about field trips to the museums or to the lake;  after that, forays into Chicago for theater and light opera, a couple of big city drunks.  Then my life shifted west.  At this point, I hadn’t been in the Midwest in over ten years.

I landed in the early evening and shot out of O’Hare riding a blue line train, a smudged yellow tube loosely filled with young people and old people of varying colors, oblong windows showing only obscure darkness, sometimes just tunnel.  Then the train hit its mark and spun me out the doors and through the turnstiles and up to the level of the street, right into nighttime Chicago:  the L train rattled up ahead as I got my bearings in the canyon of tall, dirty buildings and city lights.  I dropped off my luggage at the Palmer House, and coming back out through the revolving door onto Wabash into a stiff wind I was glad for the ridiculous coat.

I walked up to where my friends were having dinner, in the happy throes of a deeply exciting telescoping feeling for me in the Loop:  at the same time I am young, and I am not young;  I am the age and coloring of the adults in my memories, and I am happy over details that would amuse a child.  Striding along with the rest of the street life I am forgotten the moment I’ve been passed by someone going the other direction, so I am free to revel in my nested memories of times and selves and images that leap out from buildings and storefronts and come up back-lit from reserves in my brain.  Left turn on Michigan, more wind off the lake.  Blade-Warrior illuminated images on the side of a structure in Millennium Park–then I’m passing the ice skating rink, with actual people on it, even on a Wednesday night in February.

Another revolving door and into a big-city restaurant, dimly-lit, animated by talk and good music.  I walk through it like I know what I’m doing, and there in a sunken dining room, tucked into a booth, are my friends I hadn’t seen in a year, well-tended by a tall handsome young waiter, the three of us now the middle-aged academic-type women with whom he will engage in humorous banter but who are clearly a seperate generation.  My friends were in no hurry, so I was able to have an excellent dinner in this sunken dining room, our conversation backed up by jazz–it is Chicago after all:  the genuine article–a true American Big City, fed on the Industrial Revolution on the backs and souls of innumerable faceless immigrants, used disposably by the steel mills and slaughter houses.

Between the three of us we represented all domestic time zones, and my friend from the east coast was getting tired.  So after tea and coffee and dessert we headed out, laughing–they’d gotten lost on their way up from the hotel, I was able to take them back directly.  My friend from Colorado is busy looking up and around–“This doesn’t seem as intense as New York,” she says, and I say it has its moments, but no, the streets and sidewalks aren’t as uniformly packed as in New York.   She looks directly up into the sky.   “You can’t see any stars here,” she says.  She does most of her work from a small cabin in the mountains.    “What does that do to people?  Don’t they know they can’t see any stars?”

We stand on the sidewalk on Monroe street, looking up and around, beginning a discussion that will periodically resurface during our time here:  What will happen to the generations of kids living in cities and suburbs and generalized community sprawl, who will not know what the raw night sky really looks like?

The flight back was smooth and uneventful.  We touched down in the soft haze of the Pacific Northwest in March and I caught a shuttle to my car.  The air is thicker with moisture, softer than the Midwest, though it was still cool here, too; wrapping the coat around my legs, I threw myself in to get out to the freeway to make the Edmonds/Kingston ferry, thirty miles north of the airport.

Zooming up the I-5 corridor to Edmonds  the sky is an inky black, but clearer, freer air.  I jumped on to the express lanes at Seneca and missed a back-up from an earlier accident on 520, blowing past it at a cool seventy miles an hour, then merging back onto the freeway at Northgate and looping off into Edmonds a few minutes later.

To get to the ferry I scoot along the outskirts of the little town then drop down a long hill, which offers a momentary, breathtaking look over the Sound, over the whole area:  varying layers of blackness–the gray shapes of high evergreens along the side of the road, barely visible dark mountains on the other side of the deeply black Sound.  I can see the eastbound ferry moving along silently at this distance, its stacked layers of lights crossing the Sound as smoothly as a giant, glowing millipede.  I shoot down the hill to the ticket booth with two minutes to spare–the man in the booth smiles and takes my pass, waves me into the first lane which is already moving for loading, and we all feed slowly into the huge hull of the large double car deck, into its sour yellow loading lights.  Travel sites and the ferry schedule advise it’s a forty-three minute drive from the airport, but I made it in about thirty-five, nailing the 8:30 sailing.

I close the door of my car and head upstairs, finding to my delight that the galley is still open.  Sweeping around it the heavy coat I get a cup of tea, but then realize I really I’m actually hungry for something like real food; the grill still has foil-wrapped burgers and paper scoop of chicken nuggets, and a small container of spicy barbecued chicken wings, which seems to beat the other options; so I get those, then head back down into my car.  I’m not yet ready to interact with people under bright lights.  In my darkened car I open the wings, get a generous padding of napkins, and watch out the darkened ferry deck at the water going by, the lights of the oncoming ferry as we pass it, gleaming on the water–the high hills ahead, in the dark covered with trees, dotted with lights.

I settle in, crossing water for half an hour, amused at this wildness that signifies that I am home:  dark hills of shadowed evergreens, and tonight a significant wind.  I make a note to remind my friend from the conference that the natural sound of wind is another thing most kids today don’t know.   The boat glides up to the landing I wipe my fingers on the serviette and sip mint tea, the small town of Kingston dwarfed by the black sky and swaying to the wind.

I think I’ve noted this before, but I think what we overlook, among so many things in the modern world, is that when zipping around in airplanes and hopping time zones, to launch right back into our regular routine is a bit perilous:  we need to allow time for our souls to return to our bodies. 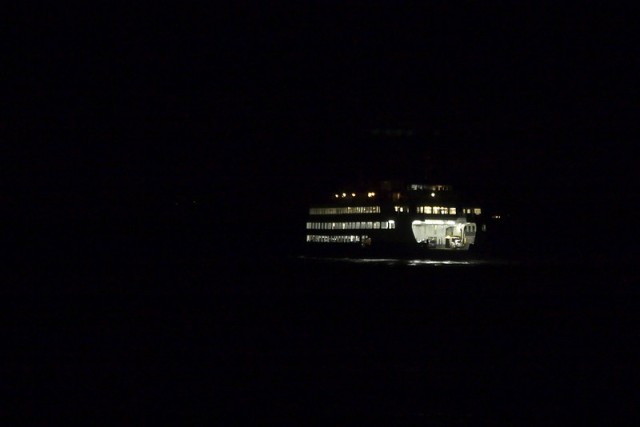 Kathleen White is a writer living on the edge of Puget Sound and sizing up the discrepancies.
View all posts by Kathleen G. White →
This entry was posted in Uncategorized. Bookmark the permalink.