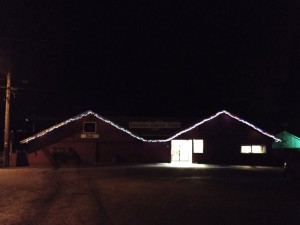 We’ve been heading into it for weeks, now.

I hear it from friends who’ve moved here from California, I hear it from acquaintances with seasonal affective disorder.  I am reminded of an afternoon with my old friend Annie, a Seattle native, as we drove back from a late lunch in December and she growled,  “Right.  It’s that time of year again.  Darkness at noon.”

It’s been coming on since October, of course, but especially since passing Thanksgiving the sunsets are more notable and the twilight begins shading in early: hazy dark at six, or maybe five thirty.  Then five.  Then four.

As I’m writing this right now, here in the PNW we’re in the 8 hours, 24 minutes period of actual daylight, and we will be until Christmas–at which point we will all be given the gift our first full additional minute.

It is now black when I wake up at 7 and it is full dark again by 5, and I do understand that for some people this is horrific, or at least disconcerting.  I have to be honest, though.  I love this time of year.

I think I always have.  I remember it when I was a kid in the Midwest: noticing the streetlights coming on earlier, or walking through the neighborhood to a friend’s house and seeing the glow from the windows of the houses.  The air could be full of the smell of leaves and smoke, or the neighborhoods banked in snow—which brought its own particular brittle, almost sweet bite of winter air, and silence of all but the crunch of footsteps.

Out here in Western Washington, of course, we’re snowless and often very wet, but the darkness is also markedly more pronounced. 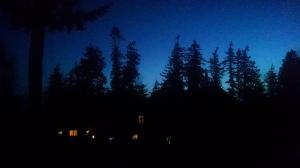 The reason is simple and geographic:  where I grew up in Indiana was the 41st longitudinal parallel of the Northern Hemisphere.  My little town of Indianola sits at 47.6.  Depending on things like axial tilt, these five and a half degrees can make a big difference in how much light is visible, and for how long.

You live long enough and you hear all sorts of repeating noises from other humans, and reaction to the early winter dark is a seasonal theme.  For me, though, this darkness is enormously comforting.  It’s a deep, almost velvety darkness, as opposed to summer nights which seem to me, somehow, a thinner, more transparent black.  When the darkness starts to drop in the late fall I feel safe, autonomous, and for some odd reason, deeply happy.

I once wondered if it was a biological thing, since I do not disbelieve those who find this time of year genuinely depressing and hard.

I thought about my family, the various nationalities that went into my four grandparents, for instance, and found an intriguing thing:  the Germanic sides came from anywhere from 47.3 degrees latitude in Bavaria, to the Prussians who might have been as far north as 52.  (The second cousin who did that side of the family’s genealogy was still not clear what part of Prussia we came from, and I cling to his repudiated research that suggested it might have been Pomerania.)  My Bohemian great grandmother from outside of Prague would have been born at the 50th latitudinal line, and the Scots could have been as far north as 56.  (White Americans can be stunning in our ancestral obsessions.)

So depending on the shakedown of genetics, this may, as I suspect, be organic.

Except that can’t be the whole story.  My sister was never fully comfortable until she moved to southern California.  Maybe she got more of the Bavarian genes, who knows, and not everything can be nature.  Still, my brother’s daughter, born in St. Louis, calls me from where she lives now in San Diego, remarks on the blue skies and temperature at this time of year, and weeps.

This season is also when so many cultural traditions face and respond to the darkness, and those Germans, again, are considered responsible for the tree-thing: possibly going back to the 8th century, but certainly by the 15th they were hauling trees into their dwellings, and by the 16th century, adorning them with lights, and later, blown glass baubles.

Was it because evergreen represented life throughout the winter—or that some regional folklore believed the branches warded off witches and evil spirits?  Given the seasonally recurring nostalgia, I cannot believe that Christmas trees keep away ghosts.

The tree celebration did not immediately transfer to the colonies, by the way:  the Puritans were totally opposed to it (a ‘pagan mockery’).  It wasn’t until the mid-19th century that Christmas trees in the US started catching on, first showing up, no surprise, in German settlements in Pennsylvania.

For myself, I have no desire to haul in a tree.  Live tree?  Chopped tree?  Are they environmentally sustainable?  Should it matter?  What about an artificial tree?  (what are those made of?)  What about one of those fine, aluminum Christmas trees of the ’50s and ‘60s, like the gold and silver number my grandmother insisted on, with the weird round lights that looked like electron microscope photographs of pollen?  The lights were elegant enough, she said, that the thing didn’t need ornaments.  It was fancy enough on its own.

City lights and stoplights blinking a bright red and green, yes, I may put up lights, why not? They’re beautiful, and the colors are wonderful against the dark night sky at the windows.  And there are all sorts of other ways to get light, this time of year.  Full-spectrum bulbs in the home, tanning booths, if anyone still takes that risk; firing up the houselights inside, or, if necessary, taking the rash act of migrating south:  New Orleans at 29 degrees latitude, Miami at 25.  A New England friend has moved to Costa Rica, and now rocks happily at 10.

When I lived in Houston (29.7), one year my neighborhood in the Heights held a Mexican Posada that passed through several blocks, mapped out in luminairias.  Never mind that the weather was warm enough we didn’t need jackets, the candlelight through the paper bags looked magical against the December night, and even to this agnostic, joining in with the crowd of neighbors, all following the path to find a safe place for the birth of the Christ child, was beautiful.

In the largely unseen world, this time of year the creatures have their own organic practices for facing darkness.  Many animals are less active, some have reduced metabolism and heart rate.  Their body temperatures drop, and this can be pretty intense: I do see squirrels still hopping alongside the road, but chipmunks and other rodents have gone into hibernation, as have insects and snakes.  Bats and bears settle into torpor—defined by Merriam-Webster as “a state of mental and motor inactivity with partial or total insensibility,” which isn’t far from the symptoms I hear a lot of people describing.

This time of year something in me settles; becomes quieter, moves less, but it’s more a centering than a sleep.  And it rests there, even as I work and live my life and walk the dog and all that, and watch everyone around me doing all they can to capture and revere light.

December brings oil lamps to remember, candles to set aflame.  We look to the solstice, with its plea for us to trust the gradual gains in daylight.  Whenever Christ was actually born, humans have coupled that event to the darkest time of year, starlight falling on the baby that would later claim to be the light.

I step out on my porch 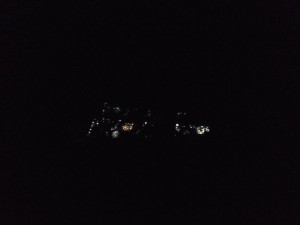 and off through the evergreens I see small blues and reds and greens and gold, sparkling on my neighbor’s houses.  Then I hear the faintest rustle of something moving slowly along my fenceline.  Whether deer or something less endearing, I can’t tell.  In the dark blue of the early morning sky I hear the eagles calling, I have no idea what they’re up to, but I do know that they and the owls are already building nests, obedient to instincts that are certain of the next season.

Ultimately, I suppose, for any of us it is an inside job, this need for illumination.  It can fire on the warmth of memories or from a spiritual core, or emanate from astronomical forces that don’t need our conscious minds to understand.  It is the radiance of our own interior furnace, the unseen glow of being alive, even in this season of darkness, and believing that will continue.

It’s all about the light. 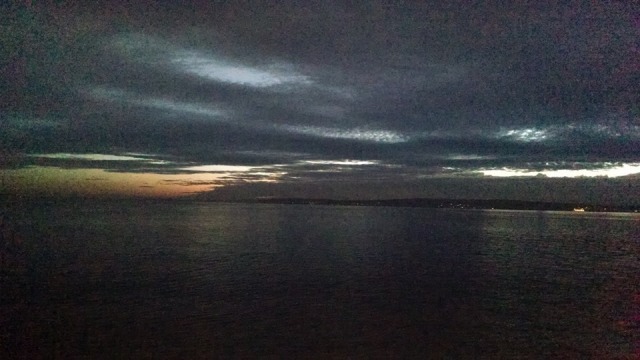 Kathleen White is a writer living on the edge of Puget Sound and sizing up the discrepancies.
View all posts by Kathleen G. White →
This entry was posted in Uncategorized and tagged darkness, December, light, Pacific Northwest, winter solstice. Bookmark the permalink.

3 Responses to About the Light