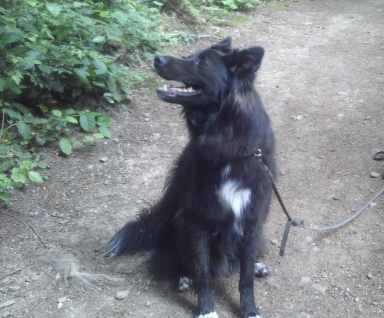 Two years ago I took over a border-collie Belgian shepherd mix, a crossing, a trainer told me later, that isn’t great, because the two breeds are intense in opposing ways.  The family he came from should have had something more bullet-proof, like a lab or a husky.  This character is sensitive as any seismic equipment, possibly dual core, and I’m pretty sure he shifts between 4G and wi-fi, all without any idea what any of it means except that data is suddenly coming at him from everywhere.

And the children must have named him: sixty-five pounds and wired for sound, they called him Coco.  Too close to Cuckoo I decided, so I rechristened him Calhoun.

I think he spent his entire life in the family’s back yard, because everything, everything, from people on sidewalks to busses passing in the street seemed new to this dog, and potentially terrifying–which in his case meant lunging and barking at whatever seemed spooky.  Never mind that to someone nearby, this size dog lunging and barking can be its own sort of spooky.

So we’ve done a lot of work with trainers and dog classes and I know some very nice men, and Calhoun is much, much better.  But I remain aware that his trust is conditional and he’s quite likely not to react normally.  But the same can be said for me, so we navigate pretty well.

Today we left my older dog snoozing in the living room and the two of us landed on Bainbridge Island at a connecting hike between the Grand Forest and Battle Point Park.  The forest is just what it sounds like:  a full canopy of evergreens, wild huckleberry and Oregon grape underbrush.  Battle Point Park is a mile and a half loop of paved trail winding around a community garden, soccer fields and playgrounds, and a lovely pond complete with lily pads and cattails and opportunistic waterbirds.

It had been a while since we’d been on this Grand Forest trail, so Calhoun was on alert, sniffing everything, starting with the sign.  As we descended along the path he wanted to pause at every tree and rock and a fair number of sword ferns; needed to inspect the short boardwalk bridges leading down and up and through.

The walking was quiet and calm, streaked with sun through the trees.  About halfway along the trail a grandmother and three small children were coming our way.  On Bainbridge, grandma may indeed be in ripstop capris and Keens as this one was, and more concerned about my dog’s well-being than whether he’d threaten her children, but I put him into a sit to be sure, and she very kindly asked if he was a puppy;  he is nearly thirty inches at the shoulder.  I said no, he was just a little nervous.

When the forest trail dropped us out into the park Calhoun seemed surprised, and almost immediately distracted by a little blonde girl on a bike, darting an eye at us as she zipped by.  When she got about ten feet past I heard her quietly start singing, and I had a sudden memory of being that age and singing out loud on my bike, secure in my own world and unconcerned whether anyone could hear me, until I passed people, and I’d immediately stop singing, just in case.

For a sunny mid-day, the park was placid and empty.  We walked about a quarter of a mile before we saw an approaching couple with a smallish black and white Newfoundland.  The dog ambled along with a slight sway, like an old elephant.  Clearly harmless even from a hundred yards, Calhoun tried to seem unconcerned, but as we got closer he crossed to my other side, putting me between himself and the larger dog.

We passed occasions of other walkers, then Calhoun suddenly fixated on a plastic bag of dog poop someone had left on the side of the path.  It was rattling lightly in breeze and he braced, preparing to charge it.  A middle-aged woman ran by, smiling, “He really wants that!”  My protector.  Later it was a tiny Yorkie coming, and when Calhoun showed interest, the woman walking the little dog called out, “It’s fine–he’s afraid of nothing!”  I smiled and said, “This one’s afraid of everything!”

At the pond I kept him on leash but let him wade, since it was such a warm afternoon and he’s a long-coated, dark-colored dog.  He bit the water, surprised to find it wasn’t salty, and dripped dry as we rounded one of the last bends toward the playground and parking area, heading back to the forest.

Some distance ahead of us came a slow-moving couple:  an old woman with bright, copper colored hair, bent over a walker, and her care-giver, also clearly not in great physical shape–a woman maybe forty, but heavy, and bobbing like she had a bum leg.  It was a toss up whether the care-giver was trying to steady the old woman or steady herself on the old woman.

They were coming out from behind some trees when I heard one of the women start to sing.  It registered only as a song for a very young child, or someone who thinks she has become a very young child, or a person treating her as if she is one–I tried not to get too far into deciding which, but I found I was sort of irritated.  I wasn’t sure what Calhoun would do when he got closer to the walker.  I decided he’d be fine.  And if he started to get nervous I’d just sit him down like I did with the kids.

The old woman was bent once in her low back and again in her shoulders–a sort of bow-shaped body moving in slow spurts with the walker, she continued deliberately forward, and when she spotted us the singing abruptly stopped and I saw the her eyes brighten, clearly fixed on Calhoun.  Coming steadily on, she stretched her arm out horizontally, an awkward kind of a gesture, opening and closing the fingers of her hand like a bird beak towards my oncoming dog.  She called something in a fairly strong voice but I couldn’t make it out completely–a question that included the phrase ‘fur person’ or ‘fur character’ or something, and she was now grinning.  The caregiver reached over to her arm, quite possibly not as sure of the large dark dog coming towards them.

But the little old woman, maybe four and a half feet high in her folded state, continued toward us in slow, rolling spurts–now the outstretched hand swayed back to the walker, now she reached forward with the other hand which was closer to Calhoun.  Her arm reached ahead at the same level as her bent spine and widely smiling face.

I looked down and saw he wasn’t panicked.  In fact, Calhoun walked up cautiously and licked her hand, and she repeated her remark about his fur-personality status, and again I couldn’t make out clearly what she was saying.
“He’s a little shy,” I offered as he backed away now toward me, ears and tail dropping, but the woman was undaunted.  She was beaming, her eyes very clear and blue, and she glanced up at me, confident and happy.  I wished I understood what she was trying to say.

So I tried taking him around to her other side, since I could see he was not going to approach the walker and the caregiver directly.  He was willing to circle around and touch her other hand with his muzzle, and she continued her full smile.

Then he started to back away–I figured he’d done about as well as he could; collected him and thanked them, and they thanked me–and as we headed in our separate directions, at our different paces, they took up the singing again–“Yankee Doodle–” brightly in unison at a good energetic clip. The silly children’s song, the two of them chiming away at a perfect pitch that speaks of happiness and energy on a summer afternoon at the park.

I look down at my worried dog, working his way along the path beside me, scouting ahead.

Hard to say who was helped more. 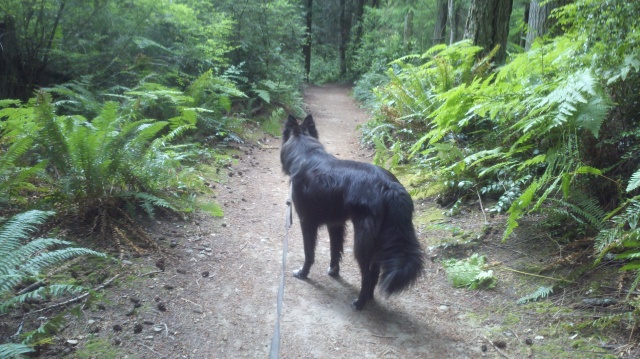 Kathleen White is a writer living on the edge of Puget Sound and sizing up the discrepancies.
View all posts by Kathleen G. White →
This entry was posted in Uncategorized and tagged Battle Point Park, Grand Forest. Bookmark the permalink.