The Entities — In My Septic System

I am not normally superstitious.  I’m no longer even practicing the mainstream religion I was baptized into at birth.  But I consider myself a definitive agnostic, as I cannot believe that human beings are the highest life form in the universe, and I do a lot of study of things spiritual.  Sometimes I do feel there are larger forces at work.  And sometimes, I just see it all as one big humorous crapshoot.

Which has led me to a sort of catalogue practice of rituals and displays.  I’ve been known to put up Day of the Dead altars in October, and burn sagebrush to drive out bad energy.  I’ve left money in boxes in cathedrals or lit yahrzeit candles on the anniversaries of the deaths of loved ones, and when I lived in Texas I acquired an entire host of tall glass candles with pictures of obscure or completely hybrid saints, each with instructions printed on the side about how to light them for a variety of needs.

Recently, partly tongue in cheek and with more than a simple glance over the shoulder where you throw the salt, I caught myself creating an altar in my spare bathroom.  It’s a long story, but a friend and I were cleaning out a small rental property we own and as usual we found a bunch of junk left by the tenants.  One piece of this junk was a rusted tin thing about a foot high and wide, maybe three inches deep, which looked like the canopy piece on a Christian altar or stupa from some other spiritual display.  Who knows what it’s meant to be, but since we were about to wade back into the search for new tenants and we were also considering refinancing the building, I thought we might want a shrine to good energy for rental properties.

Considering the diceiness of the current mortgage world, as well as my and my business partner’s shifting personal fortunes, I took the metal thing home, brushed off the rust, and set it on a shelf in my second bathroom, right next to the mirrored medicine cabinet.  Around that time a letter arrived from the bank, advising us that we were nearly ‘there,’ on the re-fi, but advising us the mortgage company needed to double-check some aspects that frankly, I wished they wouldn’t double check.   So I took the letter and put it in the small opening of the little shrine–and things just sort of built up from there.

A natural was to drape the thing with my grandmother’s glow-in-the-dark rosary, then I added a Buddhist mala and to sort of balance things off.  I gave it a candle of course, and over the next few weeks,  whenever the processes dragged on or the lack of communication from the bank seemed ominous I’d be walking down the hall and catch it in my peripheral vision, and I’d veer into the bathroom to consider what more it might need, its wonders to perform.  A carved wooden bat from Shanghai, for instance; a small rubber monster that belonged to an old friend who had passed away;  mardi-gras beads–why not?  Plastic flowers.  Dried flowers.  I almost felt like I was running out of offerings.  Then one day when I got especially gripped by financial dread, I remembered something else.

A few year back, I was brought some very particular gifts from someone who had traveled to Brazil to visit a healer–never mind that she herself was completely healthy, she’s a self-avowed spiritual tourist–anyway, in the process of traveling out to wherever this healer lives, she had interacted with the regional natives.  These enterprising aborigines have apparently fired up a small side industry of selling things to those who come to see the healer.  And not just any sort of souvenirs, by the way–these, I was told, are imbued with Entities.  The healer is possessed by or channeling these entities (it varies as to which), but apparently there are enough entities to go around that they also will sort of inhabit or energize certain crafts made by the local residents.  Not every piece brought back and given to me had entities, I was told, but those that did were very strong with them.

One has to wonder–are these local Indians truly spiritually connected to the other world, or are they savvy opportunists?  Either way, I’m sure they got a fair penny out of the friend who bought this stuff for me:  a necklace of clay-colored seeds and feathers, a woven round neck piece like a medallion, an alarmingly blue feather on a cover for a ball point pen, and two pairs of brightly-colored feather earrings.  And I mean brightly colored:  orange and crimson and turquoise and bright gold.  These could only be natural in the Amazon–except this healer doesn’t live in the Amazon, but what do I know about how far the birds migrate or what could living in the central part of Brazil?  Either these are natural feathers or they’re not, but from what I was told, at least some of them are absolutely lousy with entities.

So I got out these pieces from where I had them stored and added them to the altar, which by now was catching all sorts of intent for me, in addition to the real-estate concerns.  I took the woven medallion and draped it down the front of the shrine, though it seemed to clash with the Mardi-Gras beads, and I took out one pair of the earrings to see how I might hang them or what from. 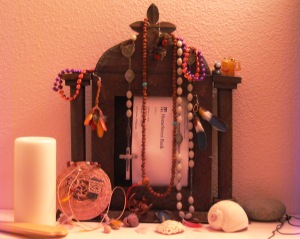 Unfortunately, in the process, a few of the feathers fell off.  One entire dangling earring began to shed pretty seriously.

I admit it:  feathers fell into the toilet.

Well, at first I was sort of frantic.  What if these feather had entities?  Was this a decent thing to allow, or should I burn the molted earring in front of the shrine?  I decided against it, since I wasn’t entirely certain these were natural feathers and I didn’t want to end up with toxic fumes.  So I dropped the rest of them into the wicker bathroom wastebasket, but it just seemed sort of cheap:  I mean, these could be spiritually alive, crawling with entities, and there they were, with wadded tissues and chewing gum.

I picked them out of the wastebasket and decided for a burial at sea–sprinkled them back into the loo and prepared to flush them down, and then I wondered:  what do the entities think about this?  Do they care?

What is the spiritual significance of sewers, if any?  The lotus, it is specifically noted, blooms above the muck it rises out of.  I’m betting on the entities just laughing at this whole business: after all, no strings on them at this point, and I can’t imagine that anything sticks.

If I flushed I’d be releasing them into my septic system, which, if they make it past the d-box, goes out into a drainfield in a very fine part of the yard, between some huge old cedars and large rhododendrons that frankly could use some healing.

I imagine the entities as formless spirits, whipping through whatever mediums they’re presented with, laughing, scot-free.

Kathleen White is a writer living on the edge of Puget Sound and sizing up the discrepancies.
View all posts by Kathleen G. White →
This entry was posted in Uncategorized and tagged agnostic, entities, home altar, home altars entities household shrine, household shrine. Bookmark the permalink.